Yesterday was World Cat Day and I did the unforgivable. It passed without my being aware of it. I mean, I know 7 August was World Cat Day, but yesterday was an extremely busy day for me. Mum was in pain the whole morning, and up to 12:15pm, she still couldn't get up to have her breakfast. Then, hubby and I had to go to Kwong Tong Cemetery & Columbarium, where my father-in-law's urn was kept, for the ghost festival. When I returned, mum was still in pain. And so I forgot all about World Cat Day until this evening, when I went online. I'd have to make it up to my kitties.


The ghost festival began on 31 July 2011 and would last till 14 August 2011. Growing up, I was a curious child. I would ask my late grandmother about the Taoist rites that I saw our neighbours along the road performed. One of them was the ghost festival.


The Taoists believe that when a person dies, Ox-Head and Horse-Face (Goo-Tau Beh-Bin in Hokkien), two fearsome guardians of hades, would escort the departed soul to the king of hades (Giam Loh Ong in Hokkien) for judgement. If they had been good, they would be in a midway 'house', a place in between heaven and earth. If they had been bad, they would be punished and tortured in purgatory (picture their hands and feet bound in chains, being whipped, and locked up in cells).


According to Taoist mythology, once a year, on the first day of the seventh lunar month, the gates of hell would be opened and that is when the ghosts utilise their 15 days' annual leave. That said, there seems to be a conflict of whether the ghosts' holiday is 15 days or 30 days long. Perhaps the ghosts are now entitled to 15 days' medical leave, taken together with their annual leave??!


Anyway, if you'd like to read more about this mythology, at the bottom of the page are a few links.


At the columbarium yesterday, there was a big paper ship. I was told that the dead will be taken on a holiday to China. 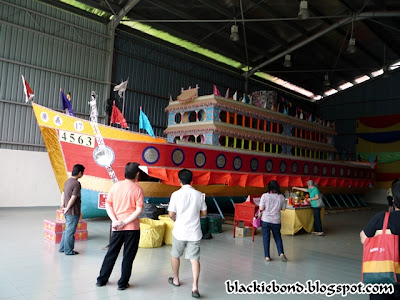 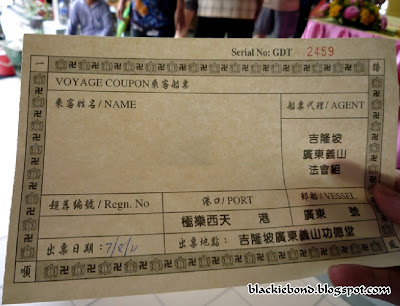 The ticket for the voyage 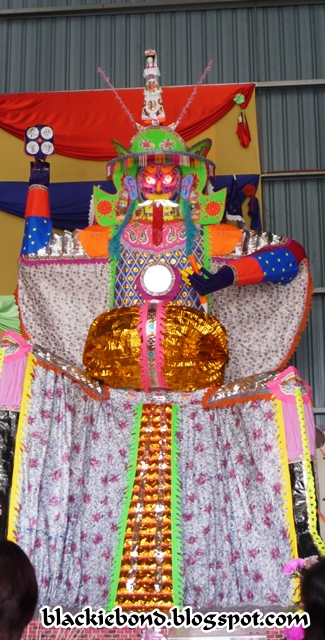 Effigy of the King of Hades...I wonder if he'll be going to China, too?

My Muslim colleague told me that during the Puasa month, it's said that all the ghost will be locked away & confined. I guess this ghost festival is meant for Chinese ghost to roam free while the Malay ghost are being locked away :D It's a good thing, we have fewer ghosts around this year! Kekekekek..... Hugzzzzz