A "Cure" For Catty Black Moods

Blackie is moody this morning. A typical morning sees him jumping onto tables, chairs, bed and dashing from one end of the apartment to the other end, much like a mini horse in a horse race. But this morning he just sits there glaring at anyone who passes by. None of the games and toys interest him.


He was in a black mood since yesterday evening, too. Usually, he is rather docile around Yin, although he does like to play rough with her. But when Yin has enough and hisses at him, he would stop. Yesterday, he didn't. Instead, he continued to whap her with his paw. And this morning, he pounced on her shoulder and pulled another large tuff of fur from the back of her neck. Gosh....I'm beginning to see a small, tiny bald patch there....I first noticed it -- less fur at the back of her neck, just between the shoulder blades -- when I got back from my holiday in Cherating. So, how to bring him out of the black mood?


A catnip pillow! It's supposed to be cat ecstasy, right?  And it worked! Blackie picked up the pillow and ran off with it. The only thing he has shown interest in this morning. 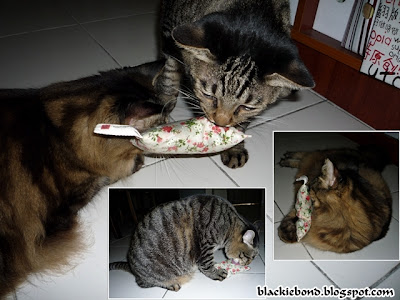 When Yin tried to grab it from him, he whapped her hard. I could hear the loud thud as paw landed on skull. Ouch. Poor Yin, she isn't used to being whacked by Blackie, or having Blackie fight with her over anything. Blackie has always let her grab toys or food right off his paws. 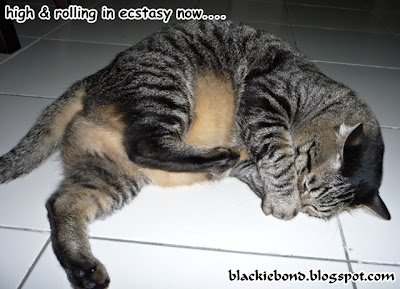 I'll have to get another catnip pillow from sillylupie so they'll have one each. Anything to keep them happy and out of black moods.

Yup an done for you so you can all cuddle together :-)

Hehehe, P-Low bringing out the ManCat in Blackie!

Thanks, Blackie, for reminding me to order some of this stuff from Lupie!

Blackie is now in his 'high' mood! LOL!