Servant Up For Adoption

Reason for putting her up for adoption:
Ever since she contracted that horrible, wracking cough, we have been deprived of a sound sleep. Many times Yin Yin or I, whoever the unfortunate party is that happened to be sleeping next to her, would be jerked awake every 2 or 3 seconds with that pulverizing sound. We are tired and sleepy (yawn) and the only chance we get to sleep is when she's out. 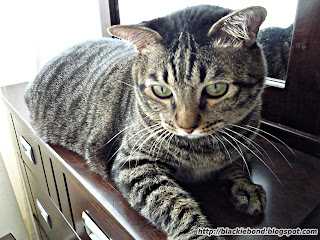 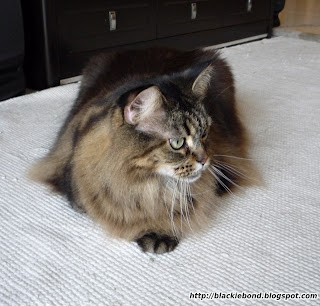 We Have Our Own Pendant! 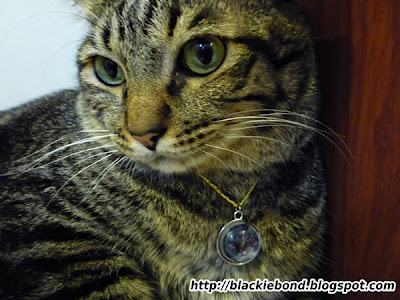 Our servant made this today! It's a handmade glass pendant on a handmade stretchable beads necklace. 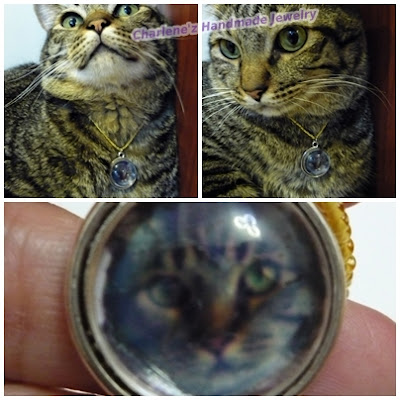 Please ignore the reflection from the light.

The Help by Katryn Stockett 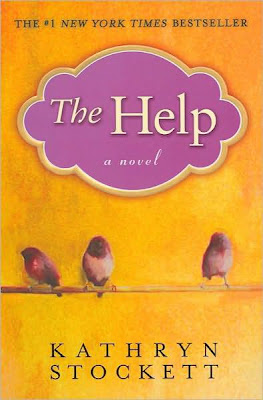 Although The Help was published in 2009 I did not know about it until it was listed in New York Times Bestseller List for the month of June 2012. I love to check out the synopsis of each book that made it to the list and if the plot or contents look interesting, I'd download the ebook. (Obtaining books used to be slightly more irksome as it requires a trip to the local bookstores and sometimes you go away disappointed as they don't have the title you want.) The Help looked promising.
Set in Jackson, Mississippi in the early 1960s, The Help is about African-American maids working in middle-class white households. The story is narrated by three strong and courageous ladies:
a) Aibileen, who takes care of Mae Mobley, a two-year-old daughter of Elizabeth Leefolt;
b) Minny, who is always loosing her job due to her sassy mouth and who now works for Celia Foote, whom the society ladies referred to as 'white trash';
c) Eugenia 'Skeeter', daughter of a cotton plantation owner and journalist wannabe.
Skeeter had graduated and returned home to find that Constantine, the black maid who raised her, had disappeared. No one would tell her what had happened.
Meanwhile, she applied for an editor's job with publishers Harper and Roe. The senior editor, Elaine Stein, called her personally to tell her that her application is rejected, but she is encouraged to write a  book on a subject that is interesting and matters to her.
Rallying the help of Aibileen and Minny, Skeeter started on her book about what it is like for black maids to work in white households. Secret trips were made to Aibileen's home where interviews with the maids are held.
As the story unfold, I was hooked and reeled in like a fish. The 'voices' of Aibileen, Minny and Skeeter are distinct from each other and believable. But most of all, it was the inhumane and racist treatment of the African American maids that got to me. I had never imagined that the whites in America was so racist in the early 1960s. I knew they were racist but to that extent?? (I had to google to verify the facts.)
'Blacks are dirty and have disease' is the constant thing you hear. They do not allow a black maid to use the toilets in the house, nor to use the same cutlery or plate as them. Everything is segregated. You have shops for the blacks and shops for the whites. As long as a black woman is not wearing a white uniform signifying that she's shopping for her white mistress, she is not allowed to enter the stores for the whites. In the story, when a black guy was caught buying petrol from a white petrol kiosk, he was beaten almost to death, never mind that he didn't know it was a white petrol kiosk. 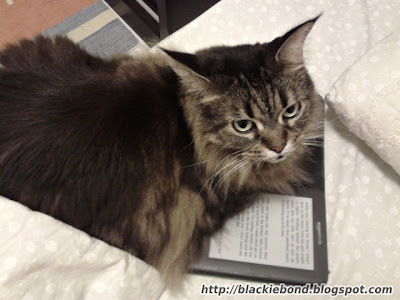 It really makes me wonder, why are people so uncomfortable with the colour black? And I don't mean only the Africans. Black cats are shunned, too. They are the least adopted, and the myth of their bringing bad luck to a household is propagated throughout the centuries.
1 comments

I woke up this morning and found the human staring at the computer screen on her desk. 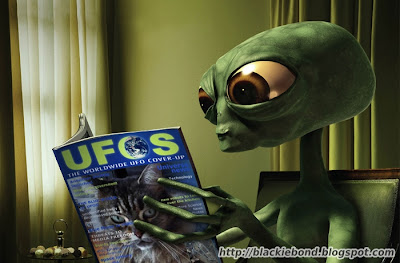 Oh my doG, that's Yin, on the cover of the magazine The Worldwide UFO Cover-Up! And what are they saying?? That Yin is an alien that has been living amongst them?? Wait.....the human has just flipped to another screen.... 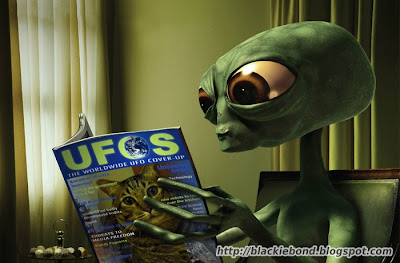 Oh no, I'm also on the cover.....and why is that human green all over with such huge eyes? He looks more like a bug than a human....

Yin Is Not Too Happy


First, our human decided that despite her bad arm she is going to subject us to a bath. Before I even suspect anything, she had scooped all 8kg of me into her arms and took me inside the bathroom, locking the door behind her.


Yin had no excuse, the fur brain should have realised what the game of the day was and put herself out of our human's reach. What did she think I was yowling at the top of my voice in the bathroom for?? Practising for the choir??


Look at her, after her bath. She's not very pleased. 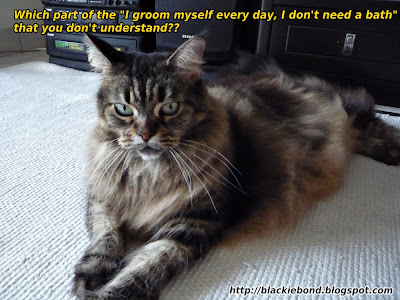 And then, to cap it off, streaks of electricity lit up the sky while someone moved some really big and heavy furniture up there. Boom! Boom! Crack!


I'm used to hearing this thunderous noise, and am rather nonchalant but Yin absolutely hates it. Forgetting her displeasure at our human, she ran and tucked herself between her legs. 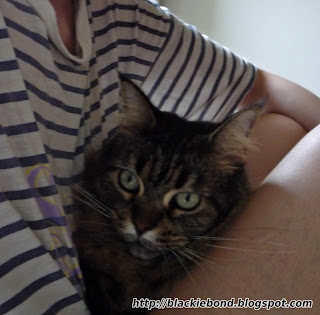 Could someone please tell her how undignified it is for a cat to tuck itself against a human slave? How are we gonna rule the world if we fear the moving of furniture somewhere up in the sky? 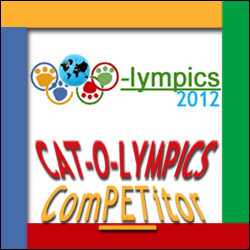 Soon it'll be the Olympics again and we are pawticipating in it even if our humans aren't.


Yin and I are entering for the Synchronized Snoozing hosted by The Island Cats. 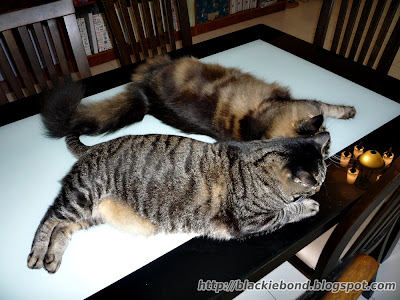 We are also taking part in Snoopendous-Sniff-A-Thon hosted by Luna and Cynder. 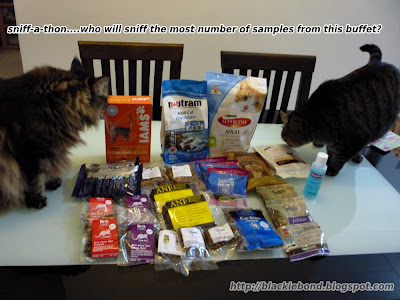 I am going for Couch Potato Peeling hosted by Lilly Belle and Muffin. 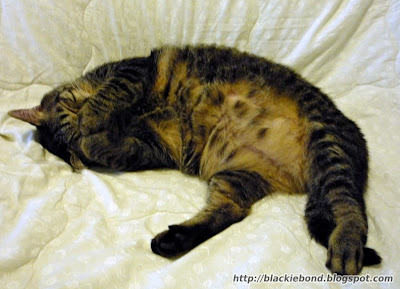 Yin is trying for Best Nippy Faces hosted by Callie and Sassy. 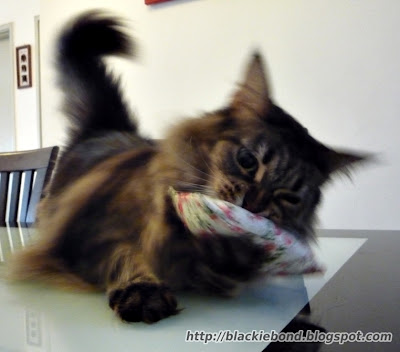 She has also decided to go for Balancing Beam hosted by Cory and Company. 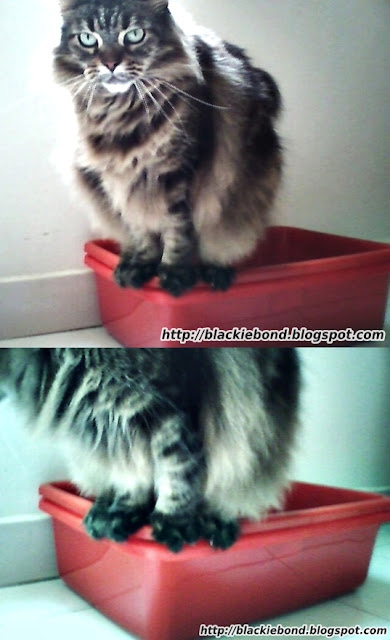 If you are a cat or dog, do join in the fun at The Pet Olympics. For more details on the events, check out their Official Events and Sponsors Page.